Passers-by do a double-take when they see the Aylings gorgeous new driveway. And when the couple are ready to retire in the sun, selling up should be plain sailing

"I’m absolutely delighted with it. It cost me slightly more than block paving my driveway and our house stands out from other houses on the street"David Ayling, home-owner

The Aylings’ new driveway has elicited a stream of compliments

David, 57, knew he had to do something about his front entrance. He had considered many driveway ideas before, but none felt right. His and Cheryl’s dream was to sell up and retire in the sun. And in a falling property market they needed a house with serious kerb appeal.

“In 2009 a ﬁrm called at the door offering to do block paving,” recalls David. “But I didn’t trust them. And I’m not a fan of block paving drives. It seems to be what everyone here has.”

The visit none the less spurred David into action.

“I saw a local ﬁrm measuring up a driveway job. And I asked them to come and do ours,” he says. “But they were supposed to come twice and they didn’t turn up. I don’t like being messed around.”

For the past 20 years, David has been running his own catering business. And he doesn’t suffer fools gladly. He searched the internet for other options. That’s how he found out about resin bound paving and saw the Clearstone Paving website. “I spoke to Andy and found him very approachable and agreeable from the off,” says David.

When Clearstone came to measure up the job, David was impressed with the range of colours of the shingles, gravels and quartz available.

Practical man David laid his own 30ft by 20ft patio at the back of the house, so he was keen to save money by doing the driveway ground work himself. Clearstone briefed him on how to widen the driveway by a metre. The Aylings took 4 days off  – Cheryl mixed the concrete and David laid it. That way the couple saved themselves £1500.

In summer 2009, the Clearstone team came to lay the new driveway.

“Clearstone turned up the day before to do the cleandown and minor repair work. The next day they arrived at 8 in the morning, laid the resin-bound surface and were gone by 2 o’clock. And the following day we were driving on it,” says David. “There was no grief. No aggravation.”

Since then, the Aylings’ new driveway has elicited a stream of compliments. And David marvels that it still looks as good as it did the day it was laid – despite an ice cold winter.

“I’m absolutely delighted with it. It cost me slightly more than block paving my driveway and our house stands out from other houses on the street,” he says. “A friend of mine wants his driveway done the same. And we get a lot of envious glances.”

David is satisﬁed he found Clearstone to do the project. “Clearstone run their business the same way we run ours – they’re crisp, efﬁcient and they get things done. They’re extremely reliable,” says David. 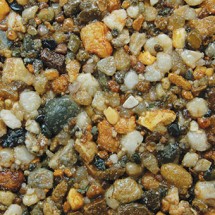